Geographical Literacy in the Renaissance

Despite historians having long ago debunked this narrative, it is still widely believed that European education between the late Middle Ages and the early Modern Age was dominated by an obscurantist and anti-scientific Catholic Church. Even today, when writing about the relationship between science and faith, scholars feel the need to state that it was not necessarily conflictual.

One of the areas where this prejudice remains strongest is geography. And yet, if we look at what was taught about the world and its shape between the Renaissance and the early modern age (roughly between the 15th and 17th centuries), we see that the schools of this period were at the forefront of geographical literacy, especially the schools of religious orders, such as the Jesuits.

The most influential treatise on cosmography in this period was John Holywood’s Tractatus de Sphaera, probably written at the beginning of the 13th century. Among its central teachings we find the sphericity of the Earth and the Universe, and concepts such as the equator, the tropics and polar circles, constellations, and planets. Based on this Tractatus, other cosmographic texts were made for Renaissance schools, such as the brief La Sfera, by the Florentine humanists Leonardo and Gregorio Dati (early 15th century), and especially the important commentary written by the German Jesuit Cristoph Clavius (mid-16th century). 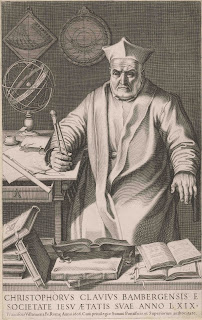 Clavius’ character summarizes all the entanglements and relevance of early modern geographical teaching. He had studied at the University of Coimbra, in Portugal, the leading country in the world’s oceanic exploration. He later became professor of maths at the Roman College, contributing decisively to the most important rule for at least three centuries to come, the Jesuit Ratio Studiorum (1599). Thanks to him, cosmographical books would reach every Jesuit college library, even in the most remote villages of continental Europe, introducing students to the new geographical discoveries and emancipating the discipline from the previous Aristotelian-Ptolemaic conceptual framework.

Thus, through the Society of Jesus, geography developed gradually as independent from cosmography and entered massively into the schools, to the point that 17th century Jesuit colleges had maps on their walls, not unlike today’s classrooms. [David Salomoni]