Building a land road is a complex task. Extensive preparation work and the participation of professionals from various fields is required. But in spite of this, the difficulties involved in connecting point “A” with point “B” can be overcome relatively easily. The existence of constant references, for example, makes the mission much easier.

But an “oceanic road” is another story. At the beginning of the Modern Age the ocean was an empty space that needed a reference system to become a reliable environment, suitable for the construction of safe transoceanic routes. In addition, new professionals and social agents were needed to shape and consolidate these routes. Thus, the ways of the sea, compared to those of the land, did not seem easy to tame. Few words illustrate so well this maritime-terrestrial dichotomy as those collected by Martín Cortés de Albácar in his Breve compendio de la Sphera y de la Arte de Navegar, of 1551 (fol. 61v): 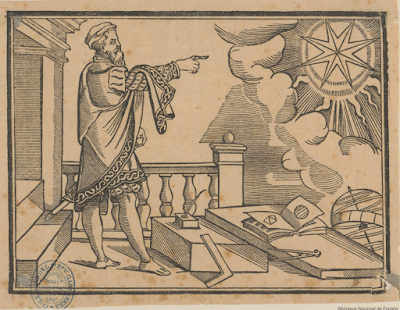 Portrait of Martín Cortés. In Breve compendio de la Sphera y de la Arte de Navegar,
by Martín Cortés de Albácar (1556). Biblioteca Nacional de España (Madrid).
Despite the challenging nature of the problem, the Iberian empires of the sixteenth century managed to criss-cross the entire world through multiple transoceanic routes. The scale of the globe had changed completely. Point “A” could still be Lisbon or Seville, but point “B” was no longer a handful of miles away, but several thousand, in Goa, New Spain, or Malacca.
[José María Moreno Madrid]
à(s) June 24, 2020