Nautical Knowledge Exchanges in the Indian Ocean in the Renaissance

During the sixteenth century the Indian Ocean was a place of exchange of nautical knowledge between different traditions: first, between Arabic and Portuguese, and later between Portuguese, Dutch and English. The last process had a key-figure: Jan Huyghen van Linschoten, who, in 1596, published the Itinerario with the main Portuguese rutters to and within Asia.

Ever since the beginning of the sixteenth century, Lisbon, as one of the global cities of the Renaissance, was a place for scientific and nautical espionage. There are multiple known-cases: the Italian ambassador Cantino, in 1502; Jean Nicot, ambassador of France, in the 1560s; Juan Baptista Gesio scientific espionage in the 1570s at the orders of the Spanish ambassador; the Dutch Houtman brothers spy-mission in 1592. By the end of this century, the major Spanish scientific and cosmographical works, and with them much of the Portuguese nautical knowledge, were already translated into English and Dutch, almost by the same time that Linschoten’s book was printed. In the Itinerario, Linschoten reports nautical exchanges in the Indian Ocean. He not only reports how the Portuguese used to hire Arabic pilots: he also depicted it as can be seen below. 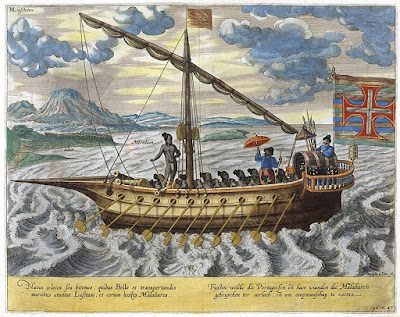 The figure shows a fusta, a light ship used by the Portuguese to sail in the Indian Ocean. In this depiction, Linschoten singles out the Portuguese captain and pilot, with a sombreiro to signal their status, but also an Asian crew from Malabar. These crews were usually recruited by Arab officers hired by the Portuguese. Linschoten also drew this officer (the mocadão) standing on the left corner of the ship. The mocadão was the link between the crew and the Portuguese officers. This drawing intended to inform how Portuguese ships in Asia were essentially composed by Asiatic crews. But it is also an example of how, by the end of the sixteenth century, exchanges of nautical knowledge between the Portuguese and the Arabs were still taking place, on the eve of the arrival to Asia of the Dutch and the English. Both cases of knowledge transfer are poorly studied and need to fully addressed.
[Nuno Vila-Santa]
à(s) June 17, 2020