Saltwater runs in the veins of sixteenth-century Portuguese theatre, brimming with technological vocabulary and a fresh cartographical vision of the world. So, it should come as no surprise that the scientific concept of the rutter flowed as a metaphor into the heart of this body of works, pervading its plays with terms of the science and technology which made oceanic voyages possible. It was a lexicon of the lived experience at sea which Portuguese theatre audiences were very familiar with, since it was used by all social strata, deeply involved as they were in this enterprise. Both a scientific document and a mental construct, at the hands of playwrights the maritime rutter became symbol of successfully finding a way to get to a desired place.

In Comedia Ulyssippo (circa 1561), by Jorge Ferreira de Vasconcelos (1515-1585), the destination is a place of love, when noblemen Regio and Alcino speak about how to get to a woman’s heart (Act II, scene 3). Commenting on an encounter between himself and Otoniam, both in love with noble sisters Tenolvia and Gliceria, Regio metaphorically describes Otoniam’s lack of seduction skills, employing the image of the rutter:


He knows little about this piloting, because it seems he did not sail outside the strait of peasant girls and concubines. And for this superior hunt there is the need for other rutters and a vast experience, as it encompasses many arts and deceptions in which the very Palinurus often loses sight of hope, which is the north of his endeavours. And his lordship has no practice in this route. 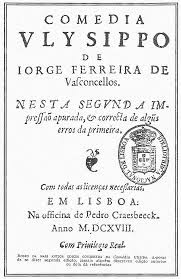 To seduce a noblewoman, one must be a pilot in the sea of love. For successfully finding a way to her heart, one must read instructions that allow for a safe arrival to the most desired place. Unlike Palinurus, the pilot of Aeneas’ ship, who was only guided by hope and therefore died at sea, the skills that Regio mentions shine with rationality, a scientific spirit, and point to the true north. Quite different from trying to gain the affection of a concubine, or to sail near shore where no rutters are needed, the path to a noblewoman’s love is not an adventure. Such as an oceanic voyage is accomplished by reading a carefully designed rutter and by relying on the experience to navigate these emotional waters.
[Joana Lima]
à(s) July 08, 2020