The “Mystery of the Needles”

“It is a thick, very high, fallow and melancholy place.” With these words, the Dominican friar João dos Santos presented the Cape of Needles (in Portuguese Cabo das Agulhas) in his book Ethiopia oriental (1609). Reading the tourist guide by Carrie Hampton, Passport to the Best of Cape Town, South Africa (2004), the impression that comes out is quite similar: the cape is an area “with dense fog, unpredictable currents and dangerous seas and worth a visit for its portentous atmosphere.” Nowadays, the Cape of Needles is commonly known as the southernmost point of the African continent, the place where the Indian Ocean meets the Atlantic. But why was it called so? 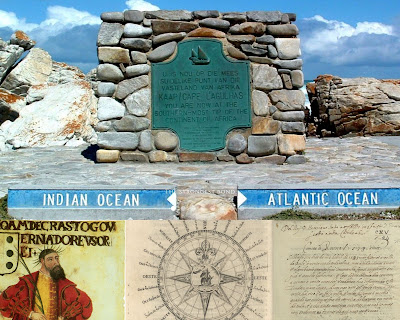 Do you know that one of the more frequent words in a Portuguese rutter was precisely “agulha”? In fact, the agulha de marear was a fundamental instrument for navigation, used to adjust the direction of the ships. This instrument was also a frequent source of errors, result of the magnetic declination of the Earth, but from very early the Portuguese pilots became aware of the problem and the determination of the angle of variation of the needle on board was part of their daily practice. The diplomat and scientist D. João de Castro seemed “obsessed” with it and wrote to the King about his hard work on the “mystery of the needles, about which so frequently the pilots complain.” In the rutter resulting from the voyage to Goa of 1538, Castro reported more than fifty observations of magnetic declination, trying to correct the Tratado da Agulha written in 1514 by João de Lisboa. The origins of the toponym Cabo das Agulhas were explained by the same D. João de Castro: the pilots claimed that the Cape was the place where “the needles don’t vary at all.”

After almost two centuries, in 1699, the cosmographer Manuel Pimentel described in detail the “Portuguese needle”, as well as the travel experiences to India of the previous forty years, and for him it was still a “magnetic mystery” whether the variation of the needle was regular or not.
[LG]