The longitude problem had been a serious issue for centuries, and it became a paramount concern in the Early Modern period, following the Treaty of Tordesillas (7 June 1494), when longitude was the parameter chosen to divide the newly discovered lands all over the world between the Portuguese and Spanish Empires.

Despite its importance, however, sailors and explorers struggled to determine longitude, and practical accurate measurements onboard only became possible much later, with Harrison’s marine chronometer, in the late 18th century. Before that, countless attempts were made to solve the longitude problem, using strictly scientific and, sometimes, more imaginative approaches. Among the creative solutions proposed, my curiosity was caught by the anonymous idea (Curious Inquiries, 1687) of using Sir Kenelm Digby’s “powder of sympathy” (unguentum armarium or weapon salve). 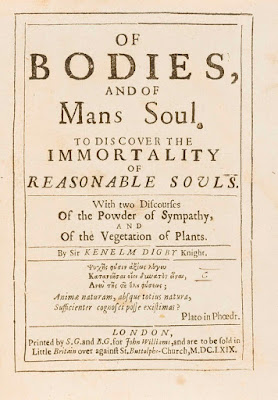 This was a preparation made of green vitriol (sulfuric acid), dissolved in water and recrystallized or calcined in the sun, that was supposed to cure a wound by being applied not to the wound itself, but to the weapon that inflicted it. The inventor suggested taking advantage of the long-distance effect of the powder for sailing purposes.

So, a ship should take on board a wounded dog. A trustable helper on shore, provided with a precise clock, would immerse a bandage previously soaked in the dog’s blood in a solution of the powder of sympathy, at a previously agreed time of day. That would cause the dog to complain at the same moment on board the ship, where people would then know the exact time and would be able to determine the longitude.

Although it is unknown if the method was ever tried (hopefully not!), the idea inspired the Italian writer Umberto Eco, who recreates this painful situation in his novel L’isola del giorno prima (The Island of the Day Before).
[Silvana Munzi]