Lucas Waghenaer’s (1534-1606) works had a great impact in the late Renaissance. Waghenaer’s first book, the two volume-edition of 1584-85 of the Spieghel der zeevaerdt (Mariner's Mirror), was the first compilation of nautical knowledge regarding Western Europe as a whole. It was composed as a pilot guide with nautical rutters and an atlas of charts. The 1592 Treasure of Navigation is usually considered as an update of the Mariner’s Mirror. The representation was extended from the Adriatic to the Baltic Sea, and smaller charts were made to be carried on board. But, how did Waghenaer come up with these detailed rutters and charts for such a huge area? 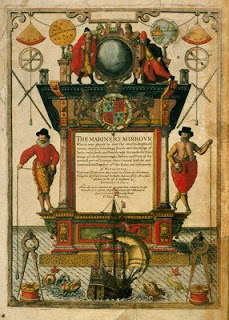 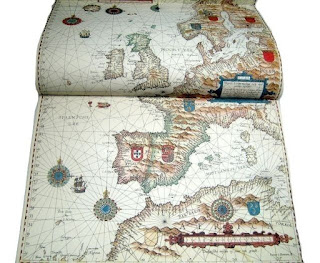 A former pilot in the Northern Seas during the 1550-70’s, Waghenaer exchanged nautical knowledge with Portuguese, Spanish, English, French and Italian seafarers. Based on this experience, he founded a Dutch nautical school to train pilots and hydrographers. He also benefited from several close contacts with the Dutch elite. The relevance of his books is proved by their swift translation into other languages. Above, we can observe the English translation of the Mariner’s Mirror. Alongside is a map of Western Europe and a chart of the Portuguese coast, from the same book. Becoming acquainted with Fernando Álvaro Seco’s first known map of Portugal of 1561, Waghenaer used it to update the depiction of the Portuguese coast. This chart influenced later Portuguese developments. 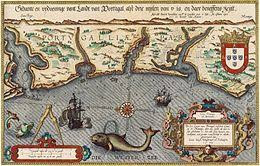 The Dutch ability in acquiring nautical knowledge was matched by their capacity to update and transform it, firstly regarding Europe, and later including other far away locations. The Dutch school became the trading-zone between different nautical traditions (Iberian, Mediterranean, Northern, Baltic), and this explains why Waghenaer’s books became the international standard during the seventeenth century for producing new charts of Europe. Now, could such developments have occurred without the nautical and cartographical developments taking place at the Portuguese Armazéns da Índia and the Spanish Casa de la Contratácion since the beginning of the sixteenth century? History of Science studies have already shown how quickly nautical knowledge circulated across Renaissance Europe, making scientific developments possible in different places. Still, further historiographical enquiries are needed in order to address this question in detail. [Nuno Vila-Santa]