Handbook for a Proper Rutter: What Cannot be Missing

When reading an early modern rutter nowadays, one can be overwhelmed by the amount of information of various kinds contained in it. For a twenty-first century historian of science these documents are a spectacular source of information, used to deepen knowledge of the biology, geography or meteorology of that time. However, what a sixteenth-century pilot expected from a rutter was that it would facilitate his voyage between point A and point B. For such a critical task, any available information would be welcome, but there were some elements which became really indispensable.

Latitude measurements, for example, were invaluable. Any worthwhile rutter had to include them. It should also include information on the behavior of the winds and tides, as these were the “fuel” for the early modern vessels. Accurately providing the depth of the waters was equally crucial, since running aground on an unnoticed sandbank could be the last mistake a ship ever made. With the same aim of avoiding misfortunes and facilitating the pilot’s labor, the courses also became an obligatory element of any proper rutter. 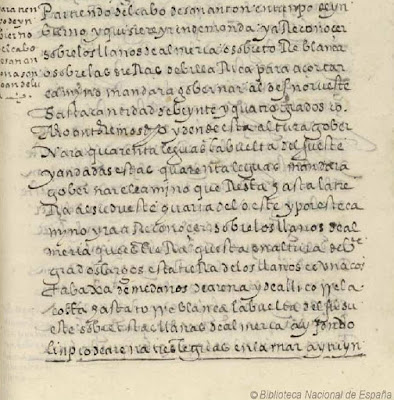 When the ship was approaching the coast, a careful description of its geographical features, such as capes or gulfs, was very helpful. The specifics of natural harbors, bays and beaches were detailed with special care, since these were the favorite places to stop over. Conventionally, the distances between the aforementioned locations were specified. They were preferably given in leagues, but more rudimentary distance measures were also used, such as the well-known “just a stone’s throw away”.

If this is “just” the essential data that a standard rutter had to include… Can you imagine the amount of knowledge on the natural world that is gathered in the thousands of rutters written during the Modern Age? Just thinking about it makes one dizzy!
[José María Moreno Madrid]