No historian would deny the role of the Italians in the great early modern voyages of exploration. However, attention has always been disproportionately focused on the great names, like Christopher Colombus, Giovanni da Verrazzano, Amerigo Vespucci, Giovanni Caboto or Antonio Pigafetta.

Less prominent figures, though, for whom individual narratives were not produced, were far from irrelevant, and it is worth rediscovering them briefly. Among them we find explorers, sailors, and narrators who have contributed to our knowledge of the Iberian maritime expansion.

As early as 1364, the Genoese sailor Nicoloso da Recco and the Florentine Angiolino del Tegghia de’ Corbizzi had arrived to the Canary Islands in the service of Afonso IV, king of Portugal. Less than a century later, in 1455 and 1456, the Venetian Alvise Ca’ Da Mosto, together with the Genoese Antoniotto Usodimare, explored the mouth of the Gambia River, in West Africa, in the service of the Portuguese Prince Henry the Navigator. Later in 1502, it is thanks to Matteo da Bergamo, an Italian commercial agent, almost a forerunner of Antonio Pigafetta, that we have much information about Vasco da Gama’s second voyage to India, including the slaughter of the Arab ship Miri. Another Italian commercial agent was the Tuscan Giovanni da Empoli, who went to India in 1503 on the armada led by Afonso de Albuquerque. Da Empoli left detailed accounts of his journey. Later he went on other Portuguese missions, eventually dying of cholera in 1515. 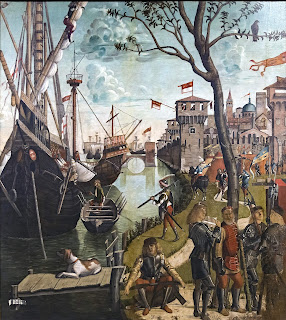 However, the journey to which the Italians perhaps made the greatest contribution was the first circumnavigation of the world led by Ferdinand Magellan. In addition to the famous chronicler Pigafetta, twenty Italians were on board the five ships that left Seville in 1519, almost 10% of all participants. Among them was the helmsman of the Nau Trinidad, Leon Pancaldo from Savona, a family friend of Christopher Columbus.

The Italian participation in the Iberian discoveries was not limited to the 16th century. Between 1786 and 1788, another Tuscan, Alessandro Malaspina, made a voyage around the world as a captain in the service of the Spanish crown. From 1789 to 1794, Malaspina also undertook a scientific expedition throughout the Pacific Ocean, exploring and mapping much of the west coast of the Americas from Cape Horn to the Gulf of Alaska, crossing to Guam and the Philippines, and stopping in New Zealand, Australia, and Tonga.

Even today the Marina Militare Italiana, the Marinha Portuguesa and the Armada Española continue to collaborate in international missions in the Mediterranean and the Atlantic, for example through the EUROMARFOR naval force created in 1995, renewing in the present the ancient fellowship of these queens of the sea. [David Salomoni]