Artisanal and Theoretical Knowledge in the Renaissance

Who is right, the renowned scholar or the curious traveler?

Reading the 1596 Itinerario by Jan Huygen van Linschoten (1563-1611), Bernard Paludanus (1550-1633) annotations to the main chapters on the several Asian naturalia, like black pepper and pineapple, amongst others, are everywhere. Each chapter starts with Linschoten’s brief description of the product, where to find the best produce and where to sell it better, usually ending with a short description of its medical uses. In practically every chapter, Paludanus wrote his annotations based on his academic knowledge. However, on several occasions, Paludanus contradicts Linschoten. Why did this happen?

Both relied on the book of Garcia de Orta (1501-1568) about the Drugs of India. But, while Linschoten used the Portuguese edition of 1563, adding also his personal observations of several naturalia, Paludanus relied essentially on the Dutch edition by Carolus Clusius (1526-1609). Since the edition by Clusius had several differences from the first Portuguese edition, one could suspect that this would explain the discrepancies between Linschoten and Paludanus. 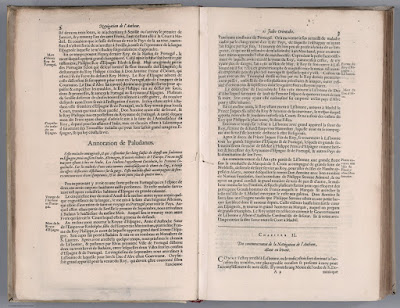 Nevertheless, what prevails in the Itinerario is the growing importance of artisanal knowledge. This process is one of the distinctive marks of Renaissance, as it has been highlighted in several studies of History of Science. European maritime expansion brought about, for the first time in a wide scale, the direct contact between learned academics and less educated people, as the Iberian case demonstrates. Sailors and pilots had to present their practical problems to theoreticians and academic court officers. There were often contradictions and open conflicts between the two. Still, soon cooperation between both became a reality in institutions like the Portuguese Casa da Índia or the Spanish Casa de la Contratación.

The same exact process is present in the Itinerario. Although contradiction between Linschoten and Paludanus stands out, both collaborated in the writing. The Doctor was delighted to learn from Linschoten’s experience with the naturalia of Asia and Linschoten profited from Paludanus’ public support for the publication. While in several cases Paludanus scientific notes have proved to be unfounded, the interest of this example remains, since it corroborates an on-going process: the growing relevance of artisanal knowledge at the end of the 16th century.
[Nuno Vila-Santa]