Being “In the Know”

From around the eighth to the nineteenth century, among sailors, slaves and other riff-raff who went on board ships through the Mediterranean, flourished a maritime contact language, fascinating mixture not only of most Romance languages, but also of Greek, Arabic and Berber languages from the North African shores. This pidgin came to be known at some point as lingua franca, “the language of the Franks,” meaning something like “the language of Western Europeans.”

Centuries later, one of its variants came to be known as sabir, a term cognate of saber—“to know”, in most Iberian languages. Thus, the shared maritime language of the Mediterranean was simply “the knowing”. This resonates with the perennial experience of life aboard ships, where crew and passengers, when boarding their vessels, enter not merely a floating structure of planks and ropes, but a separate linguistic realm, where everyday terms acquire new or technical meanings, and where unique special words become daily fare. 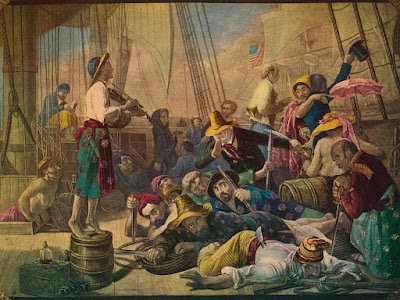 Molière gave this language a spectacular appearance in literature with the words of an “Ottoman” mufti in his Bourgeois gentilhomme:

Moving further from Mediterranean shores, one of the fascinating and still barely studied aspects of oceanic exploration was the international mix of the crews, and the development of and the encounter with other sabirs on the Atlantic, Indian and Pacific Oceans. Think of the burgeoning studies on lascar crews and language…

Moving closer to our research in Lisbon, impartial observers have detected early signs of the development of a sabir among our team members, based on Portuguese, Spanish, Italian, academic English sprinkled with Latin and a dash of Arabic, maybe… Watch out for thrilling and unexpected RUTTER linguistic developments!
[Juan Acevedo]